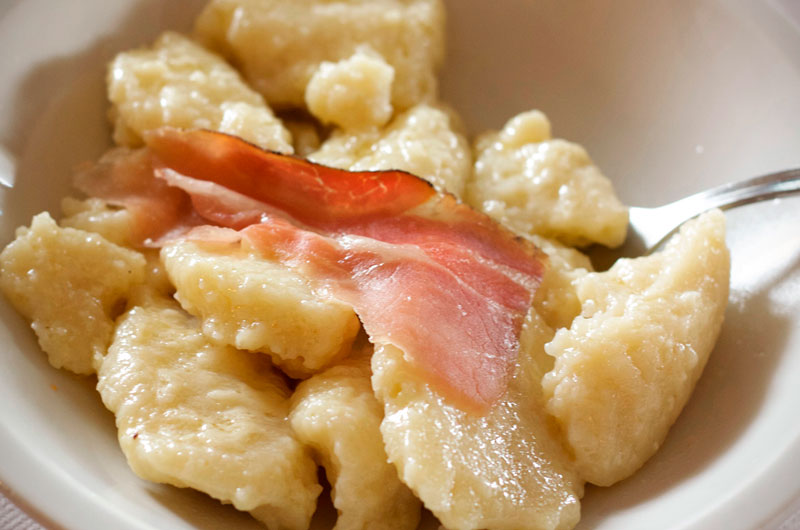 Gnocchi di Malga is a dish that comes from the Venetian pre-Alps, in particular the Lessinia region, a small oasis of unspoiled natural beauty where man has made little impact. The pastures and uplands are the source of this simple and tasty dish, which the farmers prepared during the summer season when they were working in the mountain pastures.

Ingredients for the dough

Ingredients for the dressing

When the water has reached the required temperature, add it little by little to the previously sifted flour and mix it all together vigorously with a wooden spoon to avoid the formation of any lumps. Work the mixture vigorously for a few minutes, almost “sbattendolo” (“beaten/ slammed down” – the name of “gnocchi sbatui” or “gnocchi sbattuti” is derived from this process) until the mixture has a rather fluid consistency. If the mixture is too thin add a little more flour, if it is too thick add more water.

Put a pot of water on the stove, bring it to the boil and add salt. Then transfer part of the dough onto a flat plate and wet the spoon by dipping it in the cooking water. Form the gnocchi by dropping a portion of the dough from the spoon directly into the boiling water and cook for about 15 minutes from the moment the water comes back to the boil after the dough has been added. The cooking time will vary depending on the size of the gnocchi: if you make small gnocchi with the mixture the cooking times will be shorter, if you make bigger gnocchi the cooking time will be longer than the 15 minutes stated in the recipe.

Now prepare the seasoning: melt the butter in a non-stick pan. When the butter has melted and browned to an amber colour add the sage leaves and continue cooking until the sage becomes slightly crispy.

Grate the Monte stravecchio and the Grana and mix them together in a bowl. Then lay out a base in the serving dish with the two grated cheeses and when the gnocchi are cooked drain them with a skimmer and transfer them onto the layer of cheese.

Season them with plenty of grated cheese, forming layers, and pour the mixture of melted butter and sage over the top. Once mixed together and garnished with two sage leaves, your malga gnocchi are ready to be served and eaten hot.

You can keep Gnocchi di Malga in the refrigerator, in an airtight container, for up to one day. Just heat them up just before serving. Gnocchi di Malga is a dish that should be eaten immediately after preparation, therefore freezing is not recommended.

Monte Veronese is a hard cheese that is produced by a technique using curdled milk from more than one milking session, which is how it got its name. In fact, “Monte” has nothing to do with mountains but actually comes from the term “monta”, which means “milking”.

The best wine to accompany this recipe

The wine:  ruby colour with garnet nuances; penetrating and fruity bouquet; dry, savoury and harmonious taste with a distinct bitter almond base.